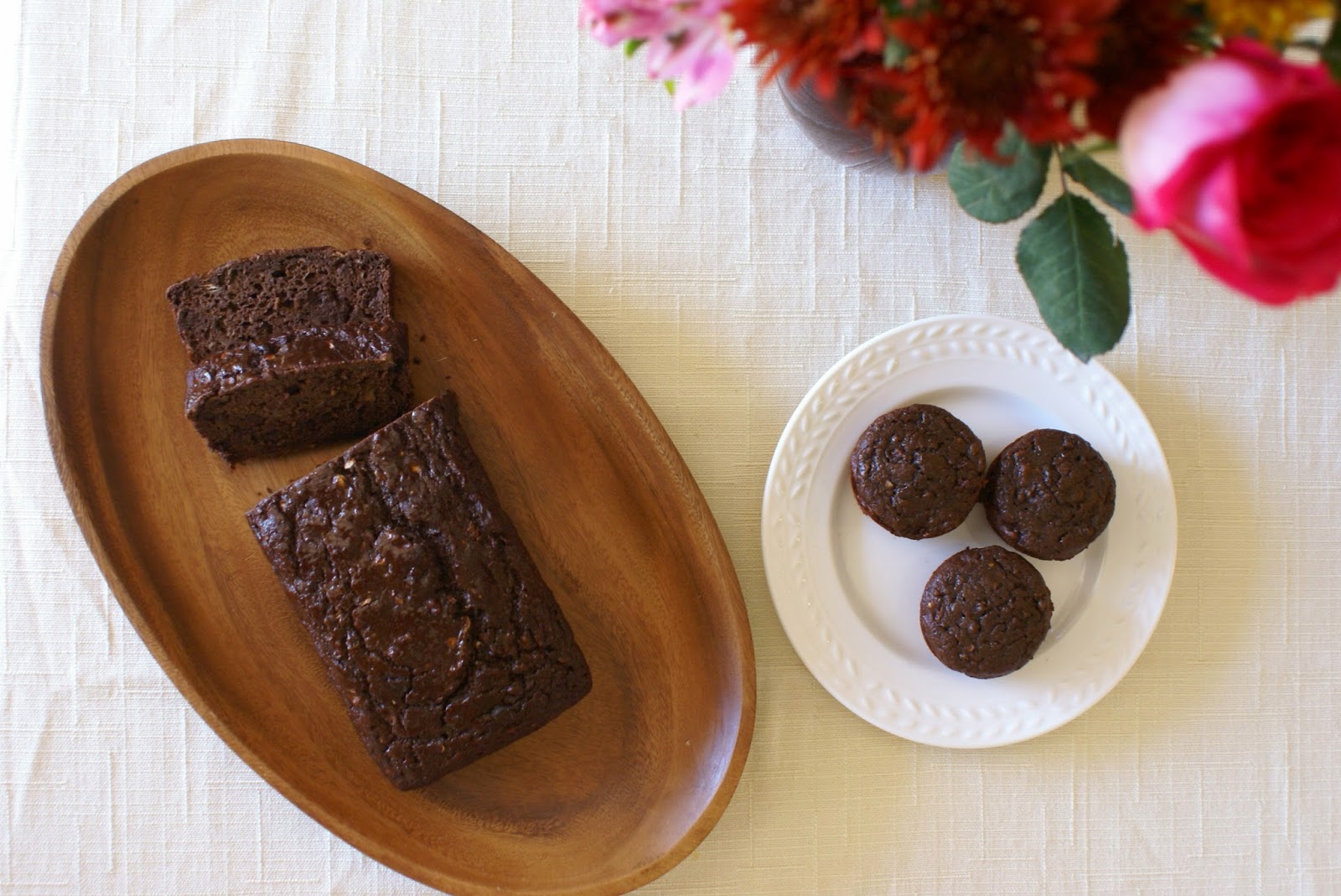 This week at work has been so busy! I wish I could say that a daily slice of this no-oil chocolate squash bread was my single indulgence to get me through, but...

let's talk about something else.

I only used about a quarter of the squash in the ratatouille from last week and have brainstormed / Googled other ways to use it up (especially because I got another one in the most recent CSA delivery). One of the recipes I found was from The Harmonious Kitchen. I switched it up a bit by replacing oil with applesauce, reducing the sugar, using 50:50 whole wheat:white flour, and increasing the squash. The end result was a just-sweet-enough, chocolate-chips-in-every-bite, soft and awesome bread. 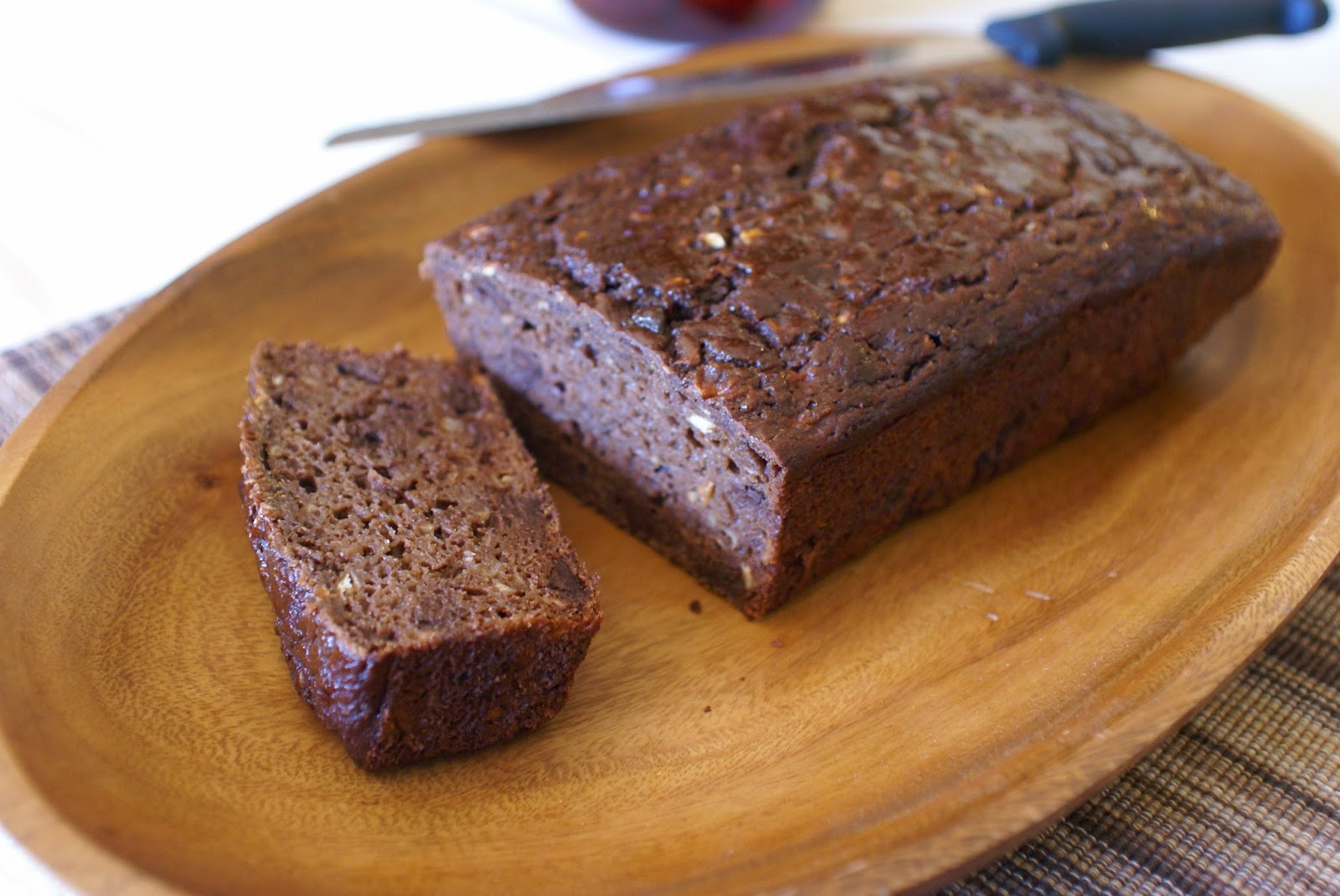 I made this last weekend when J was in town visiting and we had our first, tentative bites after a 5 mile run, which included an unplanned detour through Wiener Fest*. That's a festival of wiener dogs, in case you were wondering. In fact, a part of me wishes I had a wiener dog just so I could enter it into the races. They actually have a race for "wannabe wieners" that Newton would have qualified for, but let's be honest: watching dachshunds** run is much more entertaining than watching dogs with normal sized legs run.

And look what else we saw: 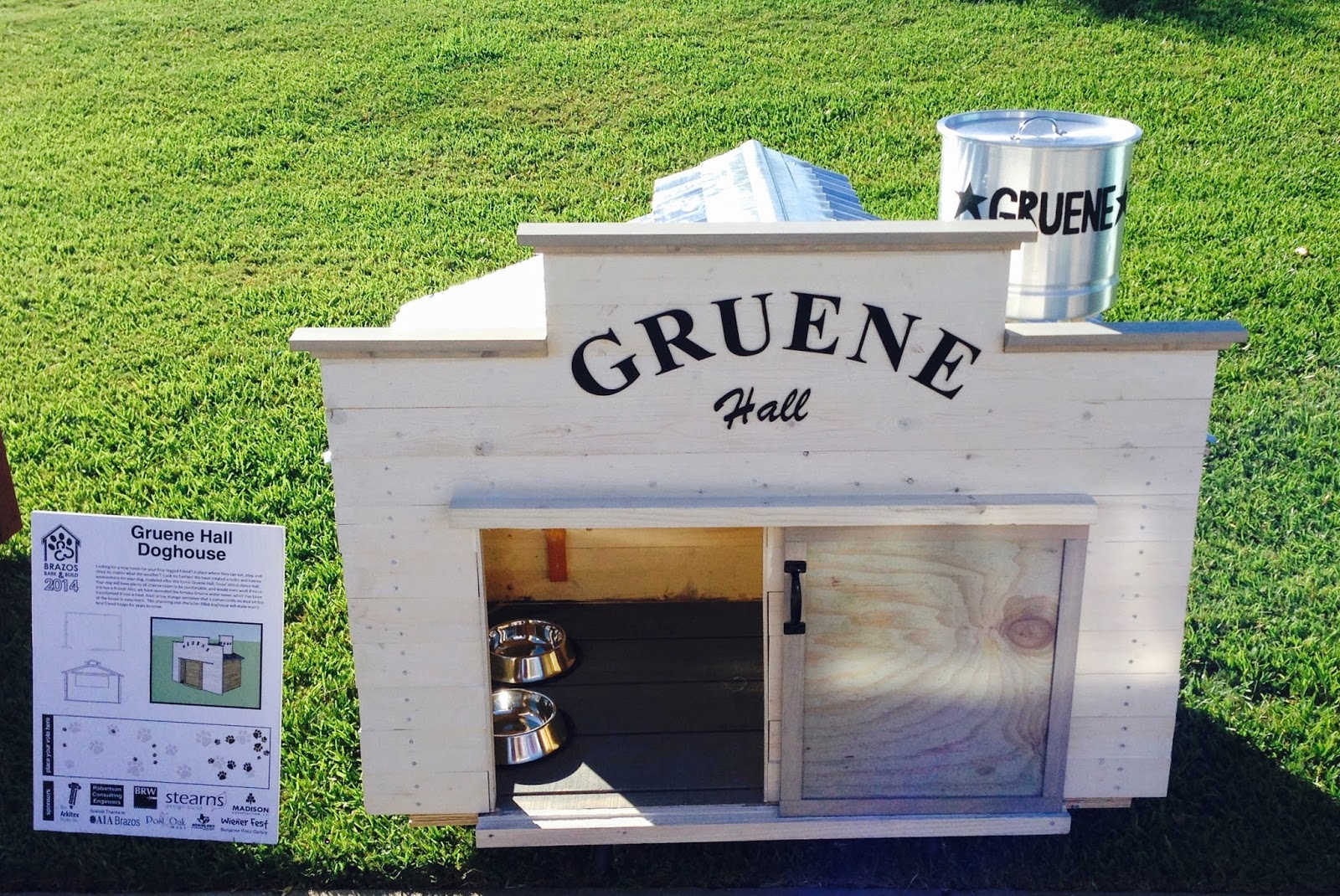 Isn't this thing so cool??! I think this was part of a "coolest dog house" competition or something, but I haven't done the research to see what exactly was going on. A bunch of really awesome doggie houses were all lined up along the sidewalk here, but this one really stood out. Amazing!

Here is your reference, non-Texas people: Gruene Hall is the most famous dance hall in the central lone star state that plays host to some of the best country music in the entire world (a la REK). 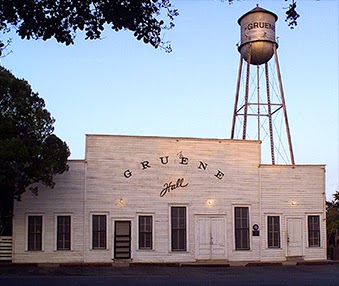 Between J's visit, randomly running (literally) into Wiener Fest at the park, seeing this dog house, and visiting with an old friend (well, she used to be my boss back in the day, but it's been a while...so we can be friends now, I think), last weekend was pretty great. And then the chocolate bread actually turned out pretty great, too, so luckily that just added to the overall greatness. 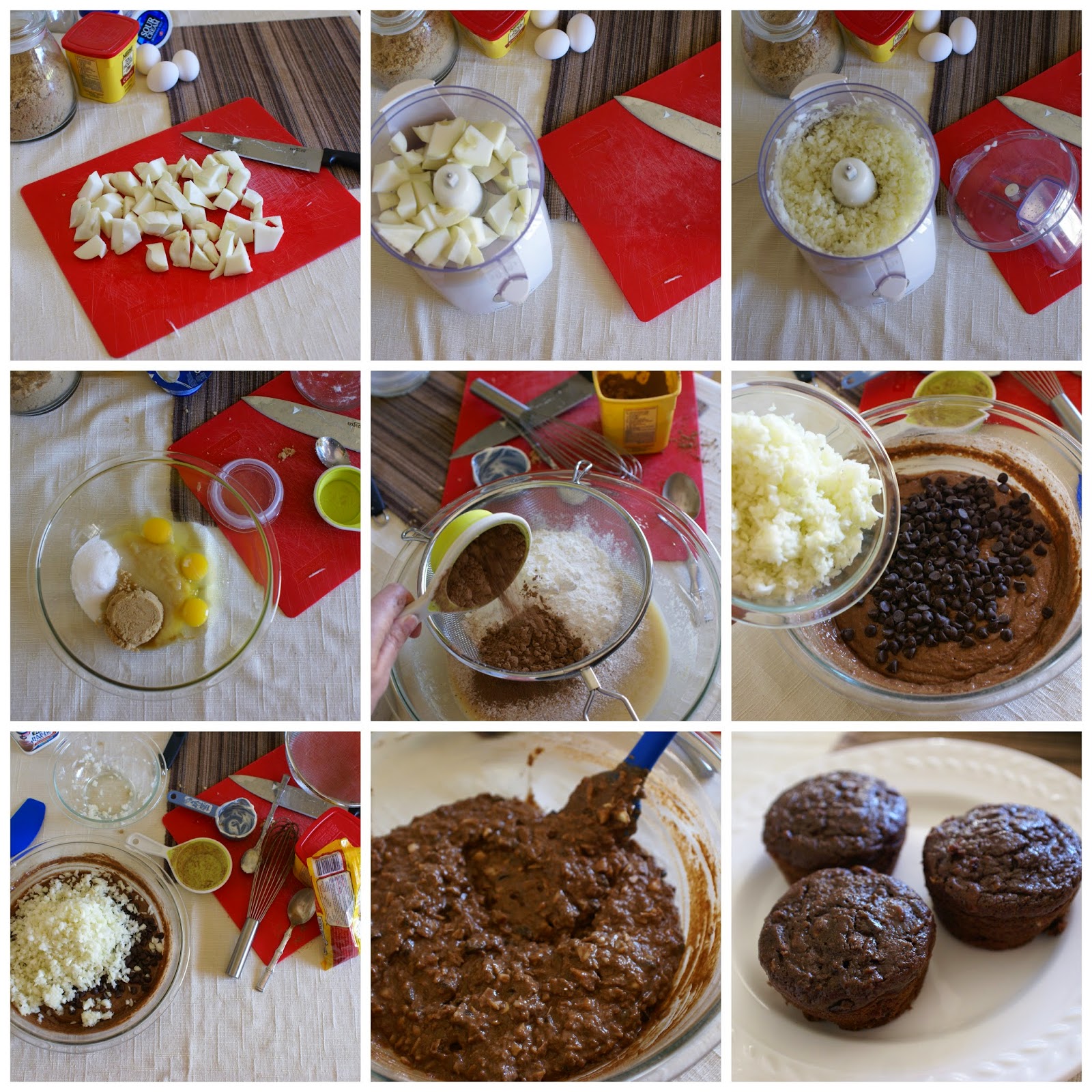 INSTRUCTIONS:
1. Preheat the oven to 350 degrees. Line the bottom of a 9 x 5” loaf pan with parchment paper and grease the sides. Alternatively, grease a muffin tin (about 18 cups).
2. In a large bowl, mix wet ingredients (applesauce, eggs, and yogurt) and both sugars.
3. Sift in the dry ingredients (both flours, cocoa, and baking powder). Mix until just combined.
4. Fold in the squash and the chocolate chips.
5. Spoon batter into the loaf pan or muffin tins.
6. Bake the loaf for 65-75 minutes or until a toothpick inserted into the center comes out clean. If making muffins, bake for about 25 minutes.
7. Let cool for 10 minutes in the pan, then run a butter knife around the edges (if necessary) and move the bread to a cooling rack.

Ordinarily, I'm all about substituting and using the things I actually have around the house, if at all possible. But, the chef's note on the original recipe warns against substituting other types of squash for the patty pan because of different water content.

I chose to fill a 6 muffin tin and then put the rest in a loaf pan. That made my own "servings" count a little weird. But the muffins will bake up much more quickly than the loaf, which is perfect for an impatient someone like me. 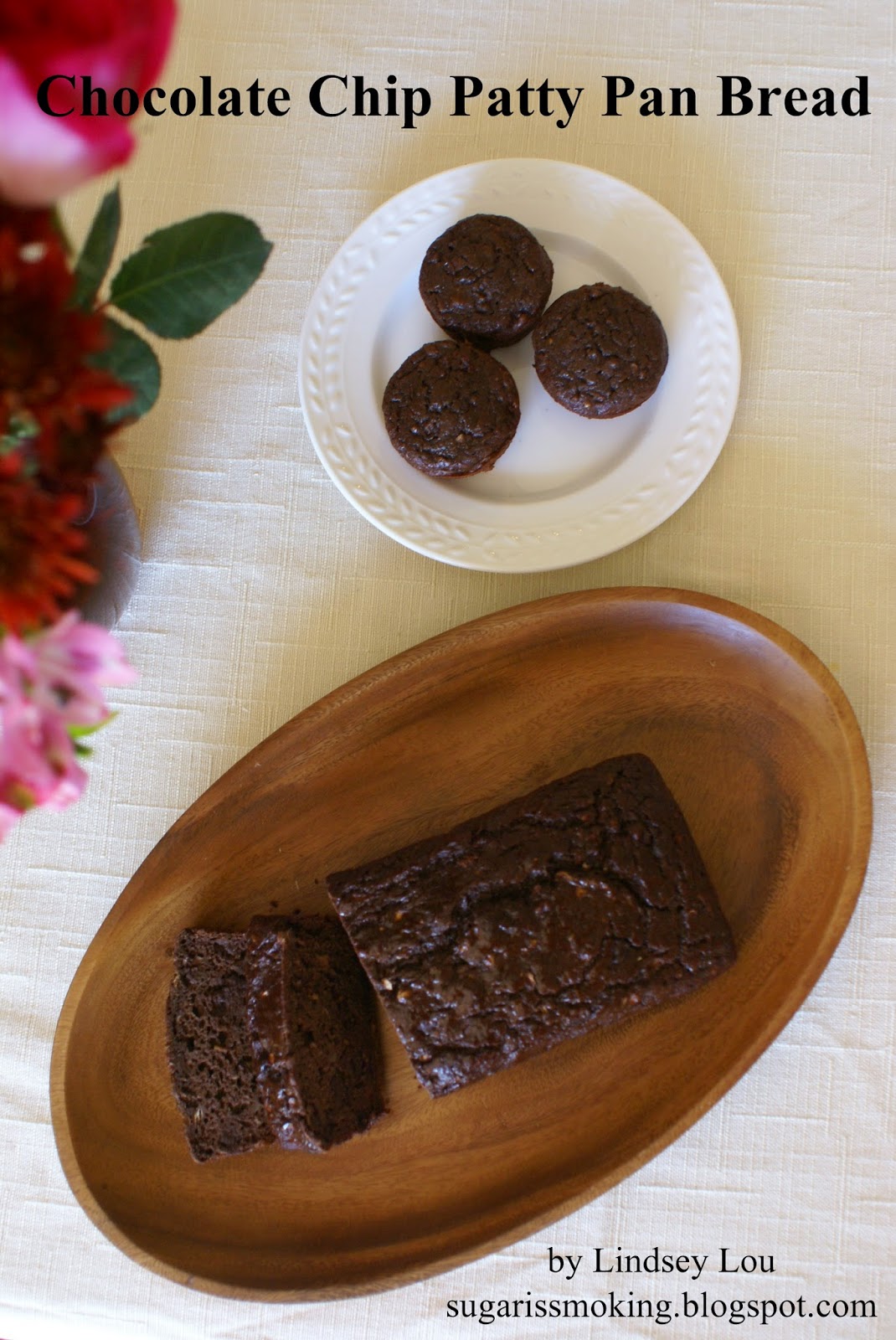 Do you see the colorful flowers in the periphery of those pictures? Those were from J -- his contribution to (me and) this recipe, making my photos look a little prettier. 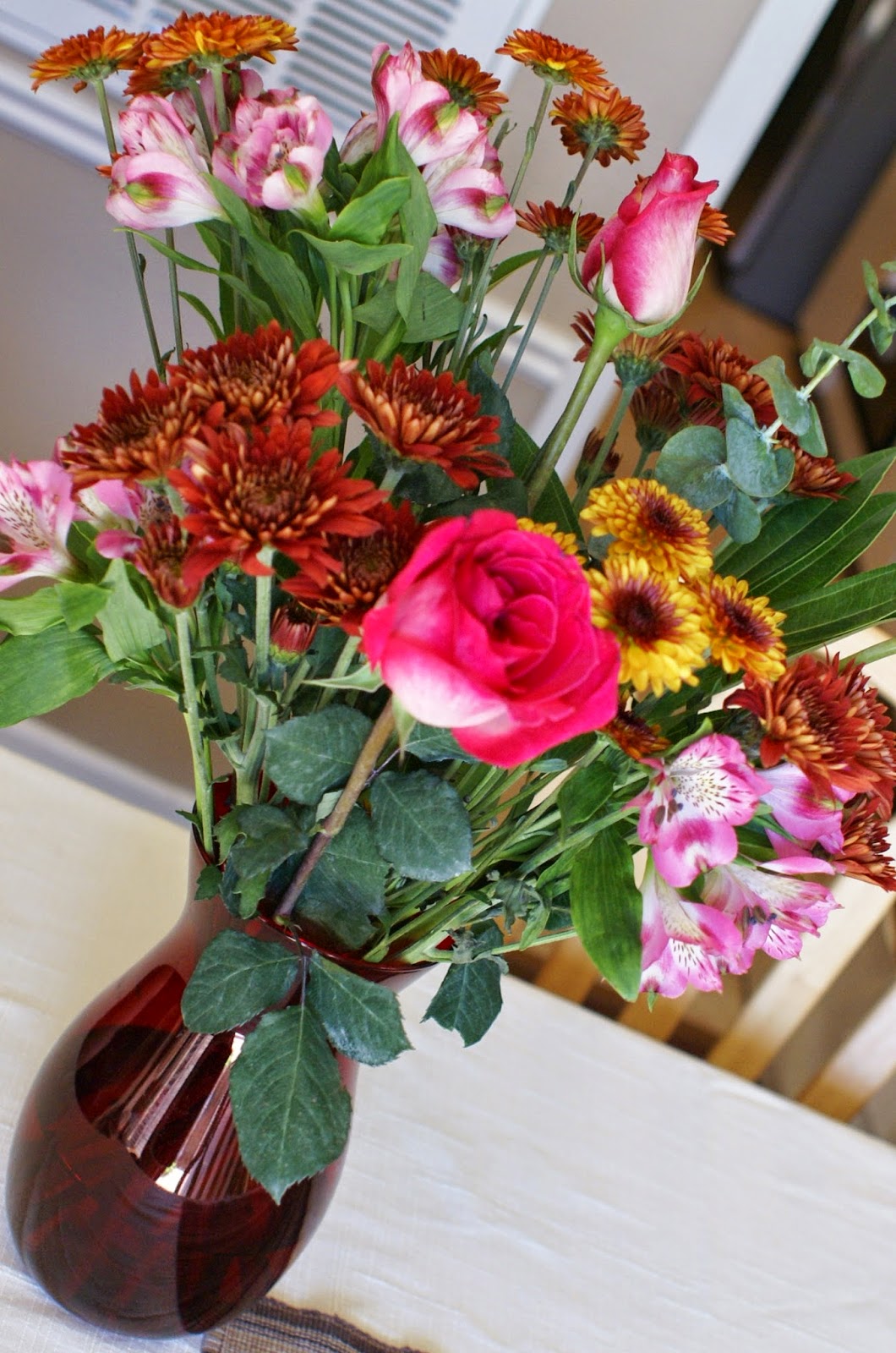 *After writing this entire paragraph about Wiener Fest, I realized that I spelled wiener incorrectly. All of the wieners were wrong.
**This is officially the most I have ever used the word wiener. Ever. In a post that was supposed to primarily be about chocolate, even.
Posted by Lindsey Lou at 10:25 AM No comments: 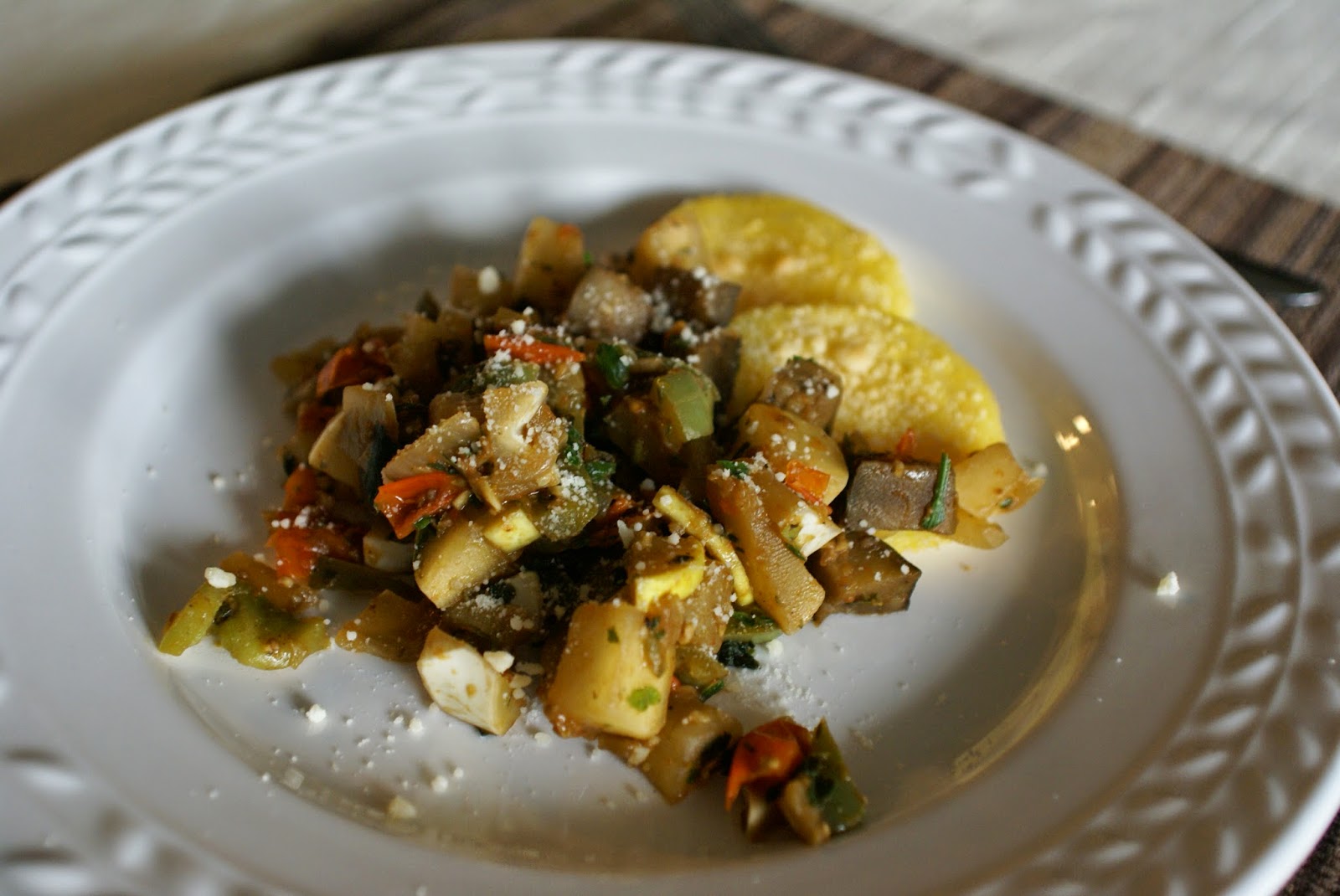 In honor of J's recent visit, I think I should start by saying that there is a blister on the inside of my dominant pointer finger. CHOPPING SQUASH. This blister is truly the gift that keeps on giving because it gets squished every time I pick up a fork. So... it gets squished pretty often.

There's proof that this recipe calls for quite a bit of chopping. It is a reminder that (1) I dislike chopping and (2) I REALLY DISLIKE chopping onion and (3) J is really good at chopping.

Unfortunately for J, this ratatouille was chopped, cooked, and down the hatch before he ever got here. 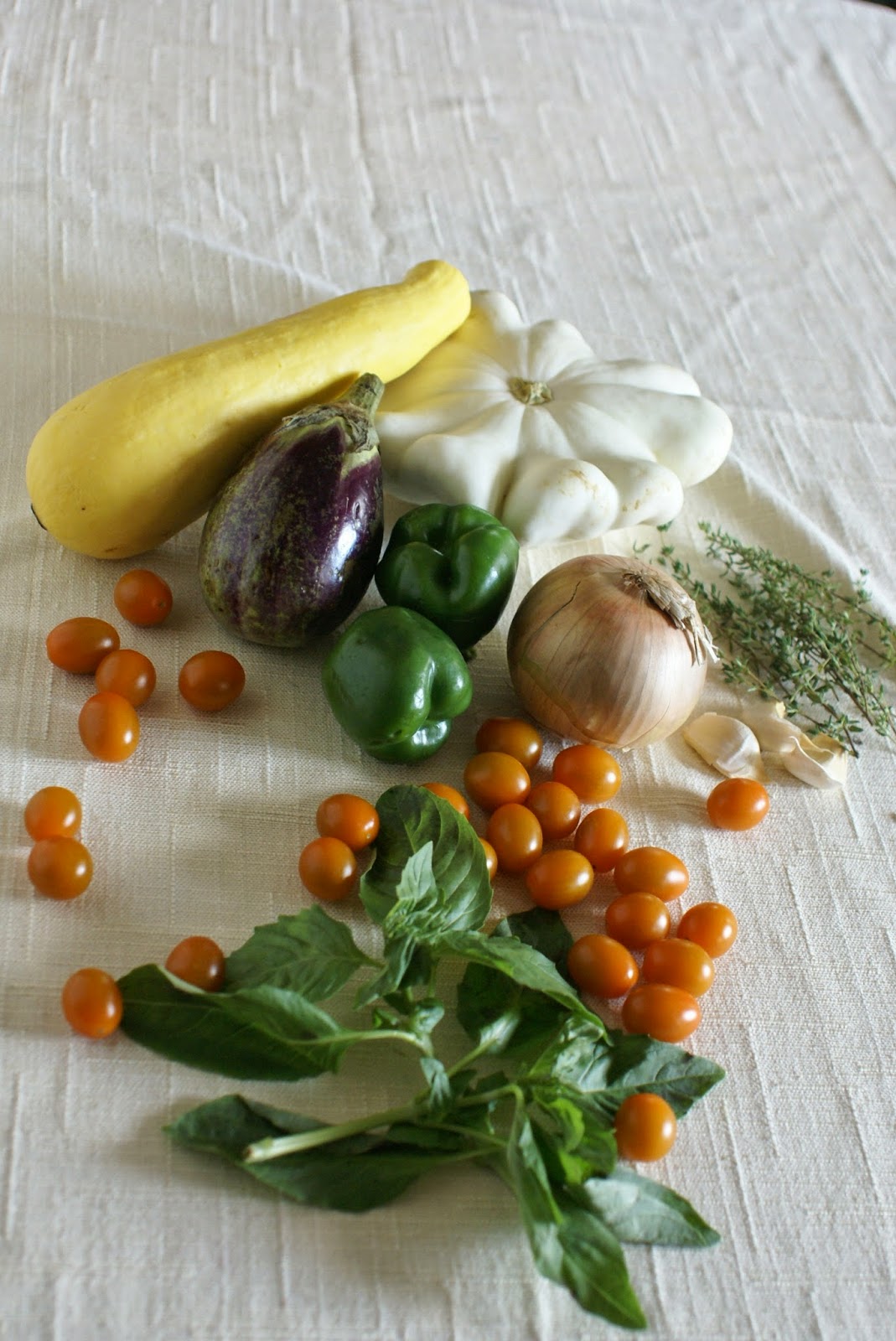 I chose to make this recipe in order to use up more of my CSA box veggies. Ratatouille is always good for that. It's a vegetable stew of sorts, generally containing tomatoes, eggplant, peppers and squash. I love it because it contains a TON of veggies and it is a pretty adaptable recipe. Use up whatever you have! Only have canned tomatoes? Go ahead! Who actually keeps a dried herbes de Provence blend, you ask? Toss in some extra thyme, oregano, and rosemary! What the hell is patty pan squash? Google it (or use a zucchini)! The addition of the patty pan squash was a new one for me, too, and it turned out wonderfully. 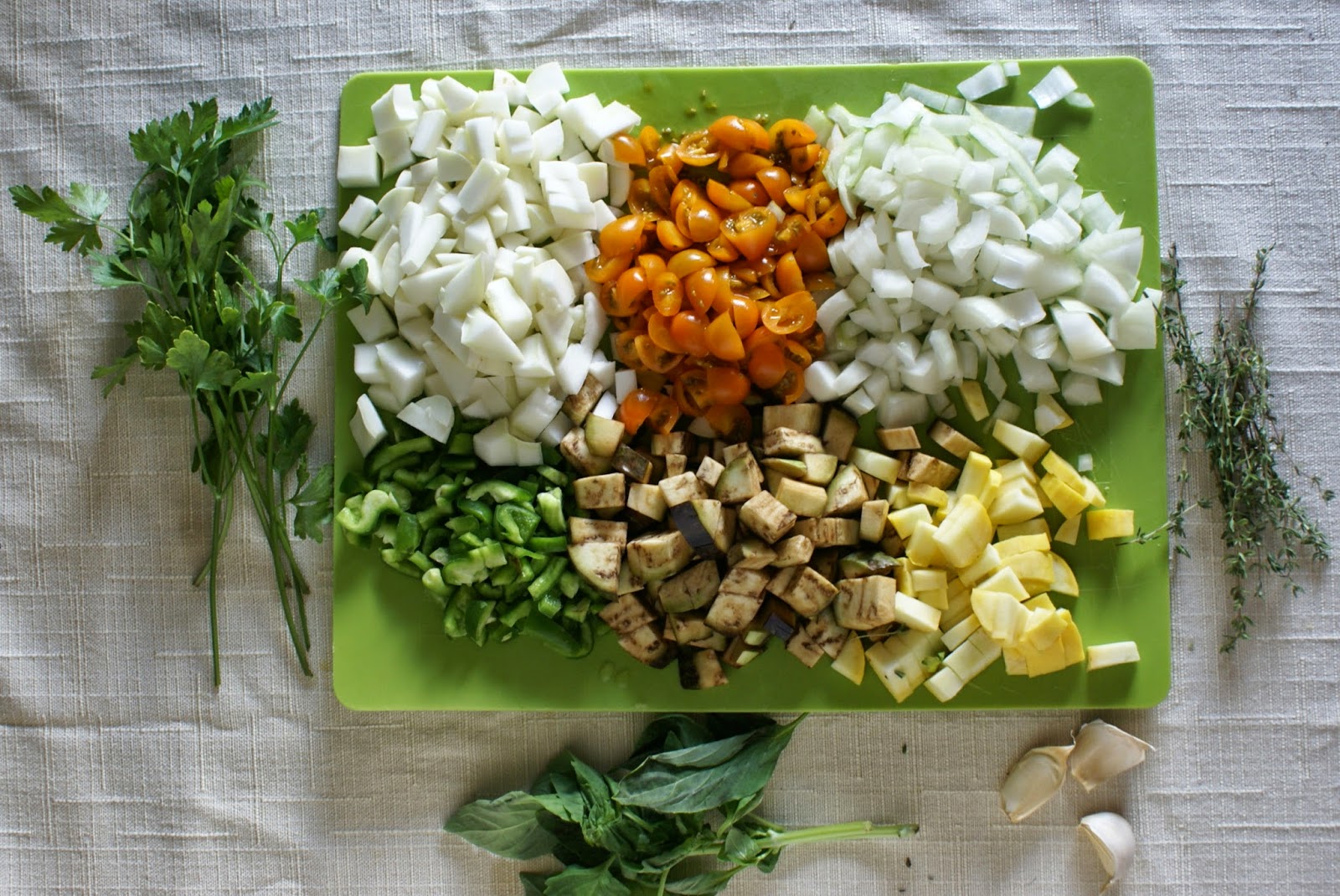 The measurements here are also pretty forgiving, so don't be afraid to use more or less than the suggested ingredients. Just BE SURE to adjust your seasonings. The first time I made a ratatouille recipe, it came out pretty bland. All of those veggies are glorious, of course. But they need salt (and other stuff) for this union to work. 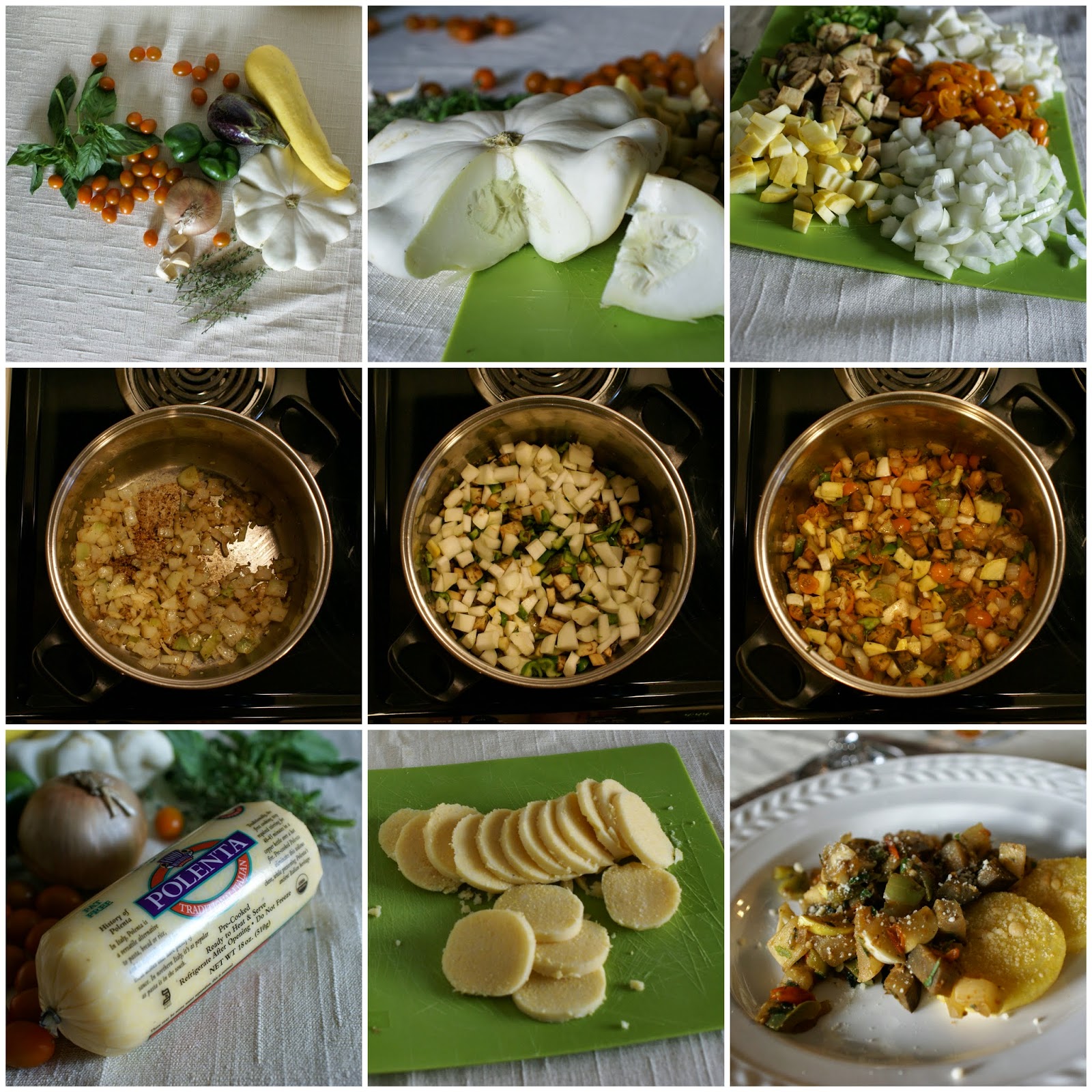 Traditionally, ratatouille is served as a side dish, but I love to eat it as a full meal. Feel free to add a protein of your choice (white beans would be my recommendation, but something like ground beef or turkey would also do the trick).

INSTRUCTIONS:
1. Heat olive oil in a large saucepan over medium heat. Sauté onions and garlic until translucent (about 4-5 minutes).
2. Add ¼ cup vegetable broth directly to the onion mixture to deglaze the pan.
3. Add dried herbs, fresh thyme, eggplant, patty pan squash, and bell pepper. Cook for 10 minutes.
4. Add tomatoes, yellow squash, salt and pepper to the pan. . If mixture appears dry, add additional ¼ cup broth. Cook for 10-15 minutes or until squash and eggplant are tender.
5. While vegetables are cooking, preheat oven to 450 degrees F. Slice polenta into ¼” rounds and place on a baking sheet lined with parchment paper. Bake for 20 minutes, sprinkling with parmesan during the last 5 minutes of baking time, if desired.
6. Mix parsley and basil into ratatouille vegetable mixture. Taste for seasoning and adjust as needed.
7. Divide polenta rounds onto four plates and top each serving with ¼ of the ratatouille and a sprinkle of parmesan, if desired. 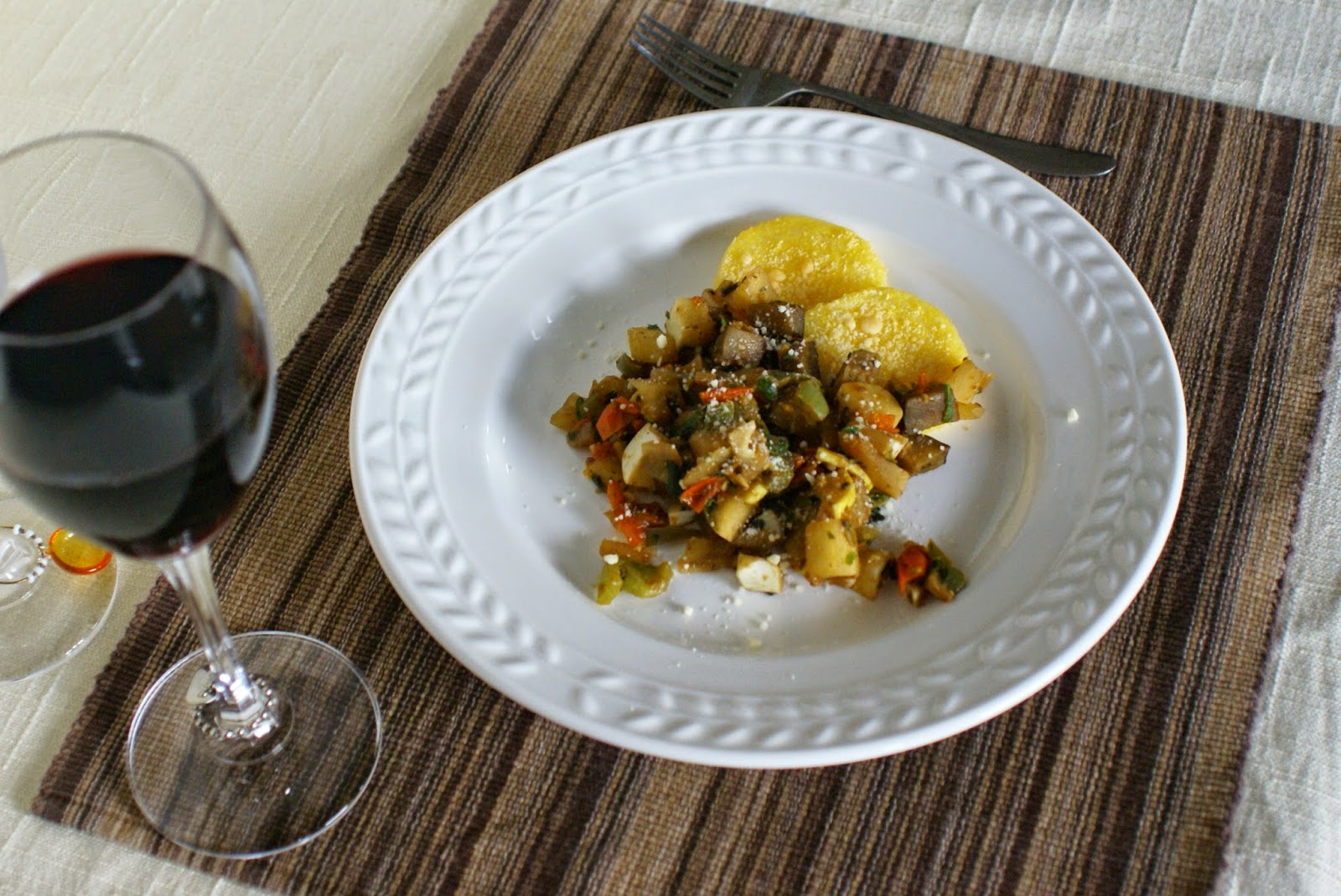 Seriously, I think that every time I make this dish, I like it better and better. Or perhaps I've become a better cook in the last five years. ;)

Finally, I encourage you all to take a moment some time today and just appreciate how it feels to NOT have a blister on your pointer finger. Just do it. 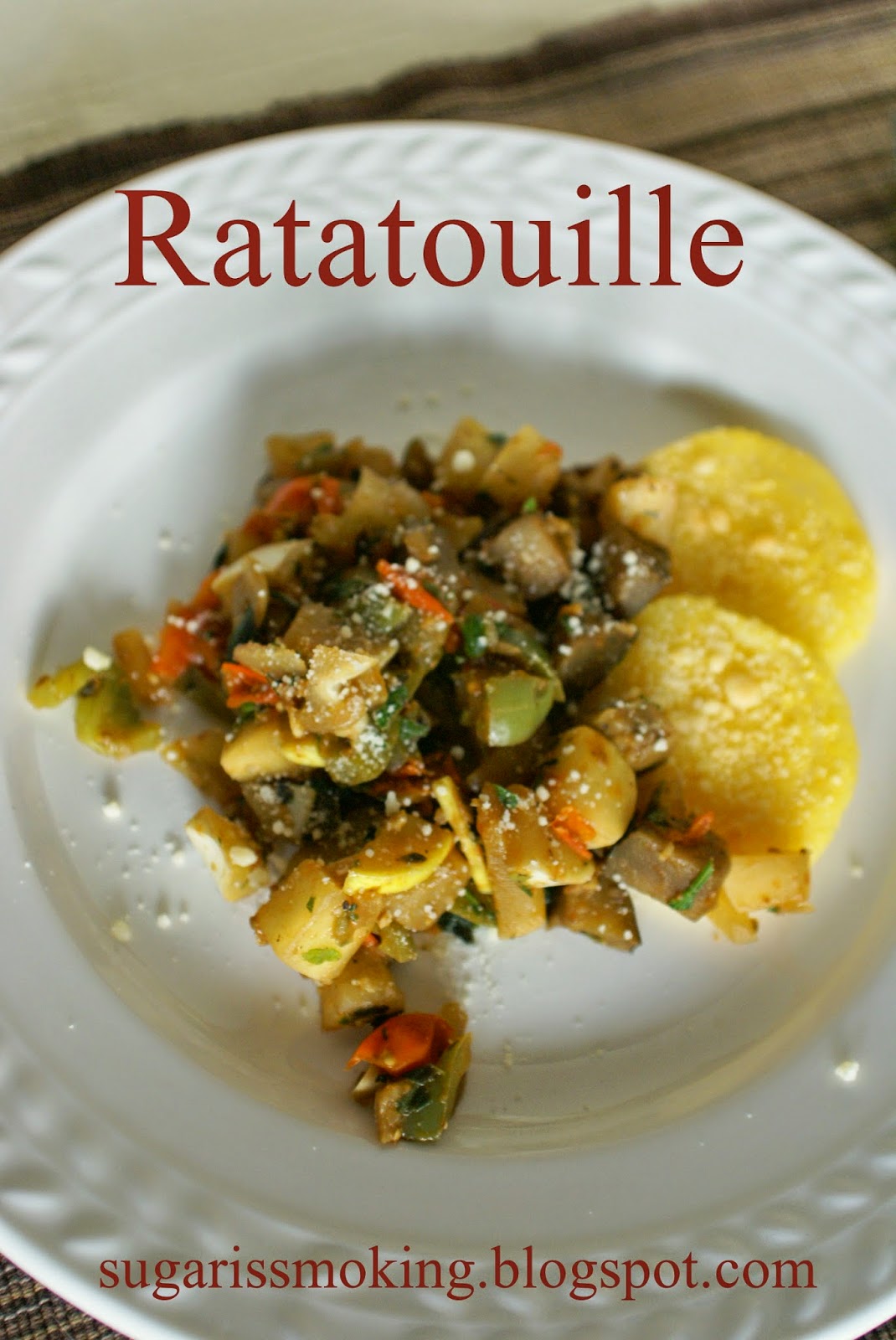 Posted by Lindsey Lou at 8:26 PM No comments:

Lindsey Lou
I'm a truth-teller and soul seeker. I am also an amateur baker and party maker. Welcome!